Join our analysts for live, interactive coverage of all major economic data at the DailyFX Webinars. We’d love to have you along.

The Japanese Yen gained Tuesday as markets reacted nervously to overnight news that the World Health Organization is to convene an emergency meeting to discuss this year’s outbreak of coronavirus.

The virus is thought to have infected humans via a fish-market in China with cases also reported in Thailand and Japan. The outbreak has come just as millions are set to travel both within China and overseas to celebrate Chinese New Year at the weekend.

While the death toll so far remains small, Asian investors have all-too-vivid memories of the Severe Acute Respiratory Syndrome (SARS). That disease also originated in China and its 2002/03 outbreak lead to more than 700 deaths worldwide and caused widespread economic difficulty and travel disruption.

Haven assets like the Japanese Yen and gold found themselves in demand on Tuesday, while riskier, pro-cyclical bets like stocks and commodity currencies were weighed down. USD/JPY headed lower. 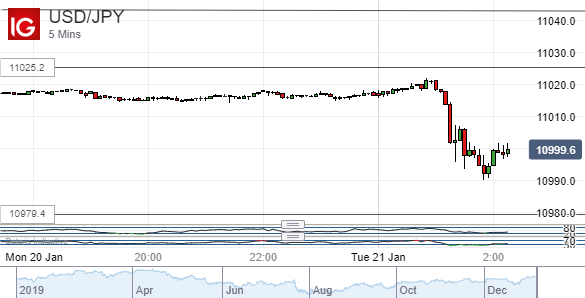 On its daily chart the Japanese Yen remains under some longer-term pressure against the US Dollar and other currencies.

Last week’s signing of an interim trade agreement between China and the US has helped boost risk appetite, as has the fading prospect of military confrontation between Washington and Tehran. The US corporate earnings season has also cheered the Wall Street crowd. USD/JPY has risen well above the broad trading range which had previously bounded trade since November 4. 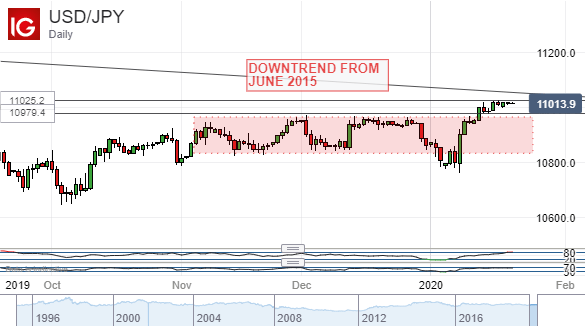 However, the rise is starting to look a bit overdone with momentum indicators suggesting that the Dollar is now overbought. That need not mean that a marked correction lower is coming up anytime soon, but it is notable that the current rally seems to have faded out just short of the downtrend line that has capped the market since mid-2015.

It remains close at hand though and will remain a tempting target for the bulls for as long as they can keep the pair above that trading range, assuming that the coronavirus story does not worsen.

of clients are net long.


of clients are net short.

Whether you’re new to trading or an old hand DailyFX has plenty of resources to help you. There’s our trading sentiment indicator which shows you live how IG clients are positioned right now. We also hold educational and analytical webinars and offer trading guides, with one specifically aimed at those new to foreign exchange markets. There’s also a Bitcoin guide. Be sure to make the most of them all. They were written by our seasoned trading experts and they’re all free.

Follow David on Twitter@DavidCottleFX or use the Comments section below to get in touch!

Hurricane Gamma is coming soon
Just when you think…
GOP Sen. Blunt: “There is a deal to had here”
GBPUSD trends lower toward a key weekly target
US Dollar Outlook: USD Price Action Focused on Fed Meeting