“Risk off” sentiment swept Asia-Pacific markets at open as US national security officials said that Iran and Russia have both obtained information about American voters’ registrations and are trying to influence the election outcome. All three major US equity indices fell over 0.5% immediately after the news, as uncertainty surrounding the US election surged.

Save-haven bid fueled a rally in the US Dollar, while the risk-linked Australian and New Zealand Dollars fell. Asia-Pacific equities looked set to open broadly lower, led by the Nikkei 225 (-0.71%) and ASX 200 (-1.11%).

Crude oil prices widened the losses to 4.2% as sentiment soured. Last night, the API report showed an unexpected rise in US stockpiles, dragging the energy sector securities lower. Besides, market sentiment was also weighed by fading hope for an immediate stimulus package and rising coronavirus cases across the country. Some 60,598 new cases were reported in the United States over the last 24 hours, adding to its total cases of 8.35 million.

What is the road ahead for equities this quarter?

The bright spot might be strong corporate earnings, with continued to smash expectations from the upside. Tesla has delivered strong Q3 results, and its share price surged more than 3% after market close. Tesla’s Q3 revenue, earnings-per-share (ESP) and forward guidance have all smashed analysts’ forecasts, and the company appears on track to delivering half a million vehicles in 2020.

On Wednesday, 25 out of 28 major US companies released better-than-expected earnings (table below). So far in the earnings season, more than 80% of the S&P 500 constituents have beaten their EPS forecasts.

On the political front, the last presidential election debate will be held at 9am Singapore time on Friday, October 23rd (9pm ET, October 22nd). Traders may get more clues from this debate with regards to Biden’s and Trump’s policy differences. Markets appeared to have heavily priced in a Biden-win scenario, rendering them fragile to unwinding activities should the election outcome flip against expectations.

Sector-wise, 9 out of 11 S&P 500 sectors closed in the red, with 65% of the index’s constituents ending lower yesterday. Energy (-1.99%) was a clear drag to the index as crude oil prices fell more than 4%. Besides, industrials (-0.99%) and consumer discretionary (-0.63%) were also were among the worst performers, whereas communication services (+1.29%) and consumer staples (+0.12%) wereperforming better. 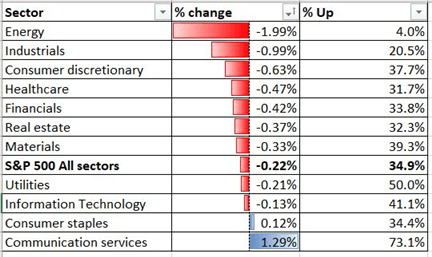 Why do interest rates matter for currencies?

Technically, the S&P 500 index appears to have entered a consolidative period since mid-October (chart below). The near-term trend has likely turned bearish as lower lows were observed. An immediate support level can be found at 3,420 – the 38.2% Fibonacci retracement. Breaking below 3,420 may open room for more losses towards the next support level at 3,380 – the 50% Fibonacci retracement.

Hong Kong’s Hang Seng Index (HSI) may struggle to break above a key resistance level at 24,750 due to external headwinds. The FBI’s investigation on election security issues have led to a broad decline in Asia-Pacific stocks, which could weigh on sentiment in Hong Kong.

Technically, the HSI failed to break above a key resistance at 24,750 – the 100-Day SMA. A retracement from here may lead to the formation of a “Double Top” pattern, which is a bearish indicator. The overall trend of HSI remains bullish, however, as the 20-Day Simple Moving Average (SMA) line is about to form a “Golden Cross” by crossing above the 50-Day SMA line. A breakout above 24,750 may open room for more upside towards the 24,900-25,000 area.